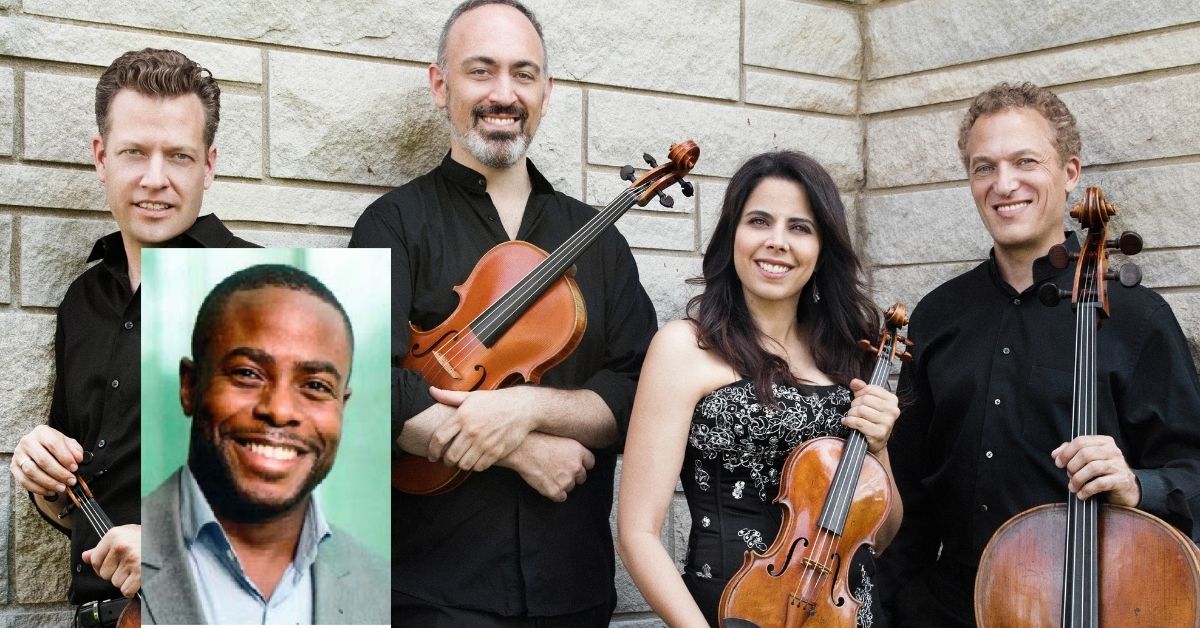 Recognized for its virtuosity, exuberant performance style, and often-daring repertory choices, over the past twenty-six years the Pacifica Quartet has achieved international recognition as one of the finest chamber ensembles performing today. Named the quartet-in-residence at Indiana University’s Jacobs School of Music in March 2012, the Pacifica was previously the quartet-in-
residence at the Metropolitan Museum of Art and has received multiple Grammy Awards for Best Chamber Music Performance. In 2017, the Pacifica Quartet was appointed to lead the Center for Advanced Quartet Studies at the Aspen Music Festival and School.

Formed in 1994, the Pacifica Quartet quickly won chamber music’s top competitions, including the 1998 Naumburg Chamber Music Award. In 2002 the ensemble was honored with Chamber Music America’s Cleveland Quartet Award and the appointment to Lincoln Center’s The Bowers Program (formerly CMS Two), and in 2006 was awarded a prestigious Avery Fisher Career Grant. With its powerful energy and captivating, cohesive sound, the Pacifica has established itself as the embodiment of the senior American quartet sound.

The Pacifica Quartet has proven itself the preeminent interpreter of string quartet cycles, harnessing the group’s singular focus and incredible stamina to portray each composer’s evolution, often over the course of just a few days. Having given highly acclaimed
performances of the complete Carter cycle in San Francisco, New York, Chicago, and Houston; the Mendelssohn cycle in Napa, Australia, New York, and Pittsburgh; and the Beethoven cycle in New York, Denver, St. Paul, Chicago, Napa, and Tokyo (in an unprecedented presentation of five concerts in three days at Suntory Hall), the Quartet presented the monumental Shostakovich cycle in Chicago, New York, Montreal and at London’s Wigmore Hall. The Quartet has been widely praised for these cycles, with critics calling the concerts “brilliant,” “astonishing,” “gripping,” and“breathtaking.”

Hailed for his “trademark brilliance, penetrating sound and rich character” (New York Times), clarinetist Anthony McGill enjoys a dynamic international solo and chamber music career and is principal clarinet of the New York Philharmonic—the first African American principal player in the organization’s history. He is the recipient of the 2020 Avery Fisher Prize, one of classical music’s most significant awards.

He serves on the faculty of The Juilliard School, Curtis Institute of Music, and Bard College Conservatory of Music. He is the Artistic Director for the Music Advancement Program at The Juilliard School. In 2020, McGill’s #TakeTwoKnees campaign protesting the death of George Floyd and historic racial injustice went viral.

The Pacifica Quartet joins forces with clarinetist Anthony McGill, friend and longtime collaborator, for a program that celebrates the joys of folk music. Starting with Prokofiev’s Second String Quartet, based on exuberant Kabardinian folk songs and rhythms, the musicians then perform the new Quintet for Clarinet and Strings by composer James Lee III, in its Florida premiere. The rollicking Clarinet Quintet by Carl Maria von Weber, one of the great Romantic composers of 19th century Germany, celebrates the joy of making music together after a year of isolation.