Chamber Music Society of Lincoln Center, “An American in Paris” 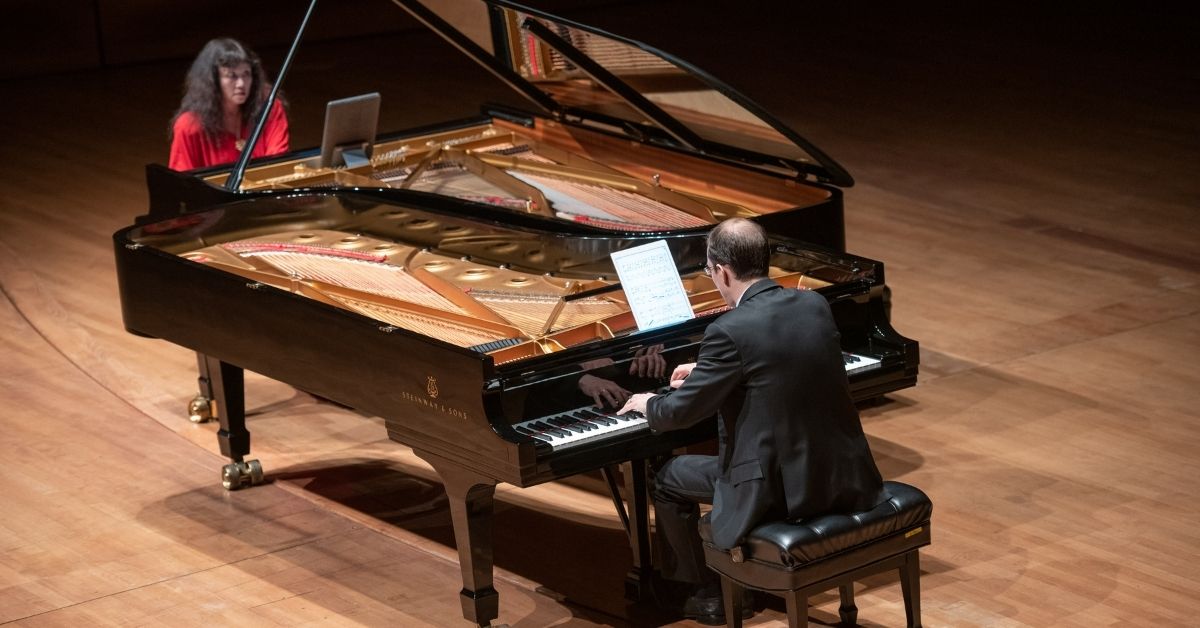 Generously supported by an Anonymous gift

The Chamber Music Society of Lincoln Center (CMS) is one of eleven constituents of the largest performing arts complex in the world, Lincoln Center for the Performing Arts, which includes the New York Philharmonic, New York City Ballet, Lincoln Center Theater, and The Metropolitan Opera. Through its many performance, education, recording, and broadcast activities, CMS brings the experience of great chamber music to more people than any other organization of its kind. Under the artistic leadership of David Finckel and Wu Han, it presents a wide variety of concert series and educational events for listeners of all ages, appealing to both connoisseurs and newcomers. The performing artists constitute a revolving multi-generational and international roster of the world’s finest chamber musicians, enabling CMS to present chamber music of every instrumentation, style, and historical period. CMS’s incomparable digital presence, which regularly enables CMS to reach hundreds of thousands of listeners around the globe annually, includes: A growing number of live-streamed programs; more than 750 hours of performance and education videos free to the public on its website; a 52-week public radio series across the US; radio programming in China; appearances on American Public Media; the new monthly program “In Concert with CMS” on the ALL ARTS broadcast channel; and performances featured on Medici.tv, Tencent, and SiriusXM’s Symphony Hall channel.

Swiss-born American pianist Gilles Vonsattel is an artist of extraordinary versatility and originality. He is the recipient of an Avery Fisher Career Grant, winner of the Naumburg and Geneva competitions, and was selected for the 2016 Andrew Wolf Chamber Music Award. In recent years, he has made his debut with the Boston Symphony Orchestra, Orchestre Symphonique de Montréal, and San Francisco Symphony while performing recitals and chamber music at Ravinia, Tokyo’s Musashino Hall, Wigmore Hall, Bravo! Vail, Chamber Music Northwest, and Music@Menlo. Deeply committed to the performance of contemporary music, he has premiered numerous works both in the United States and Europe and has worked closely with notable composers including Jörg Widmann, Heinz Holliger, and George Benjamin. Recent and upcoming projects include appearances with the Chicago Symphony Orchestra (Bernstein’s Age of Anxiety), Philharmonisches Staatsorchester Hamburg (Gershwin’s Rhapsody in Blue), Beethoven concertos with the Santa Barbara Symphony and Florida Orchestra, as well as multiple appearances with the Chamber Music Society of Lincoln Center. An alum of The Bowers Program (formerly CMS Two), Mr. Vonsattel received his bachelor’s degree in political science and economics from Columbia University and his master’s degree from The Juilliard School. He currently makes his home in New York City and serves as a faculty member at the University of Massachusetts at Amherst.

Pianist Wu Han, recipient of Musical America’s Musician of the Year Award, the highest honor bestowed by the organization, enjoys a multi-faceted musical life that encompasses performing, recording, and artistic direction at the highest levels. Currently co-artistic director of the Chamber Music Society and Music@Menlo, Silicon Valley’s innovative chamber music festival, she also serves as artistic advisor for Wolf Trap’s Chamber Music in the Barns series and for Palm Beach’s Society of the Four Arts. In addition to countless performances of virtually the entire chamber repertoire, her recent concerto performances include appearances with the Philadelphia Orchestra, the Atlanta Symphony, and the Aspen Festival Orchestra. She is the founder and artistic director of ArtistLed, classical music’s first artistdirected, internet-based recording label (1997). Her more than 80 releases on ArtistLed, CMS Live and Music@Menlo Live include masterworks of the chamber repertoire with numerous distinguished musicians, the latest being Schubert’s Winterreise with baritone Nikolay Borchev. During the past season, Wu Han designed and produced more than 200 digital media projects, including concerts and innovative educational programs, which have sustained the art of chamber music in dozens of communities across the United States. Wu Han was privileged to serve on multiple occasions as a faculty member of Isaac Stern’s Chamber Music Encounters in Israel, New York, and Japan. A recipient of the prestigious Andrew Wolf Award, she was mentored by an elite selection of some of the greatest pianists of our time, including Lilian Kallir, Rudolf Serkin, and Menahem Pressler

Taiwanese-American violinist Richard Lin is the Gold Medalist of the 10th Quadrennial International Violin Competition of Indianapolis which took place in 2018. Highlights of his 2021-22 performances include concerts with the National Symphony Orchestra in Taiwan and a tour of Japan with the National Taiwan Symphony Orchestra. In the United States, he will appear with the Baton Rouge Symphony and the Indianapolis Chamber Orchestra. Multiple recitals in Taiwan, Texas, California, and Pennsylvania will culminate in a Carnegie Hall Stern Auditorium recital debut in June 2022. Passionate about chamber music, he will give concerts in the United States as a member of the Chamber Music Society of Lincoln Center’s Bowers Program and perform at Music@Menlo. He has collaborated with numerous orchestras and performed at celebrated concert venues throughout Asia, Europe, and the United States. He is a laureate of the Sendai, Joseph Joachim, Singapore, and Michael Hill International Violin competitions and has just joined the faculty of the National Taipei University of Education. Born in Phoenix, Arizona and raised in Taiwan, Lin graduated from the Curtis Institute of Music and The Juilliard School where he studied with Aaron Rosand and Lewis Kaplan respectively. As part of his prize, he has the use of the 1683 “ex-Gingold” Stradivarius and 2017 Sam Zygmuntowicz on loan to him for four years from the International Violin Competition of Indianapolis.

Violinist James Thompson is forging a promising career as a versatile chamber musician, soloist, and music educator. A native of Cleveland, Ohio, he will be joining the Chamber Music Society’s Bowers Program in fall of 2021. In 2014 he made his solo debut with the Cleveland Orchestra at Severance Hall and has also appeared as a soloist with the Cleveland Institute of Music orchestra, the Blue Water Chamber Orchestra, the Cleveland Pops, and the Cleveland Philharmonic. He was invited to perform as part of the First Bartók World Competition and for the Seventh Sendai International Violin Competition. He has performed for chamber music festivals around the country, including Music@Menlo, the Perlman Music Program, and the Taos School of Music. He has collaborated in concert with a multitude of established musicians including David Finckel, Soovin Kim, Jaime Laredo, Paul Neubauer, Peter Salaff, and Roger Tapping. An advocate for new music, he has worked alongside composers Keith Fitch, Gabriela Lena Frank, Stephen Hartke, Libby Larsen, and David Rakowski on performances of their works. In 2019 he joined the faculty of Music@Menlo as both a coach for the Young Performer’s Program and a mainstage artist. He has recently served as a teaching fellow at the Encore Chamber Music Festival and the Western Reserve Chamber Music Festival. Thompson holds Artist Diploma, master’s, and bachelor’s degrees from the Cleveland Institute of Music, where he has studied with Jaime Laredo, William Preucil, and Paul Kantor.

American violist Matthew Lipman has been praised by the New York Times for his “rich tone and elegant phrasing.” He has appeared with the Chicago Symphony Orchestra, Chamber Orchestra of Europe, Minnesota Orchestra, BBC Philharmonic, Academy of St Martin in the Fields, and the Juilliard Orchestra, and has been a featured soloist at the Aspen Music Festival, Carnegie Hall, New World Symphony, Wigmore Hall, and Walt Disney Concert Hall. The Strad praised his “most impressive” 2019 Cedille Records debut album Ascent, which included world premiere recordings of Shostakovich and Clarice Assad, and his recording of Mozart’s Sinfonia concertante with violinist Rachel Barton Pine and Sir Neville Marriner on the Avie label topped the Billboard Classical Charts. A former artist-in-residence for the American Viola Society, he was featured on WFMT Chicago’s list “30 Under 30” of the world’s top classical musicians. Additionally, he has appeared on PBS, Now Hear This, and Live from Lincoln Center. An alum of CMS’s Bowers Program, he performs regularly at the Marlboro, Music@Menlo, Ravinia, and Rheingau festivals. He was the recipient of an Avery Fisher Career Grant and a major prize winner in the Primrose, Tertis, Washington, Johansen, and Stulberg International Competitions, and he studied at the Juilliard School with Heidi Castleman and at the Kronberg Academy with Tabea Zimmermann. Lipman is on faculty at Stony Brook University and performs on a 1700 Matteo Goffriller viola on generous loan from the Rachel Barton Pine Foundation. He holds the Susan S. and Kenneth L. Wallach Chair at CMS.

Co-artistic director of CMS since 2004, cellist David Finckel leads a dynamic musical career that has included performances on the world’s most distinguished stages as well as ground-breaking entrepreneurial projects. As cellist of the Emerson String Quartet for 34 seasons, he leaves a legacy of performed and recorded chamber music that includes virtually the complete string quartets of the major composers from Mozart through Shostakovich. His solo and duo discography is equally comprehensive, including all the standard literature for cello and piano. Fascinated since student days by recording technology, he created ArtistLed with pianist Wu Han in 1997, the first internet-based classical label to allow artists complete control over repertoire, sound engineering, editing, packaging, and presentation. His commitment to living luthiers is evidenced through his performances, since 1993, on a cello made for him by the Brooklyn maker Samuel Zygmuntowicz, a copy of the “Duport” Stradivari cello of 1711. At age ten, deeply inspired by the Russian cellist Mstislav Rostropovich, he committed himself to life as a cellist, and at age 16 became Rostropovich’s first American student. After first playing with pianist Wu Han in 1981, he added to his already busy career the responsibilities and opportunities of a professional cello-and-piano duo, both in the recording studio and on the concert stage. Finckel co-directs CMS’s Bowers Program, and as founder and artistic director of Music@Menlo, the festival’s annual Chamber Music Institute. He teaches cello and chamber music at both the Juilliard School and Stony Brook University

Chamber Music Society of Lincoln Center, “An American in Paris”