Around Dvořák I with David Finckel and Wu Han 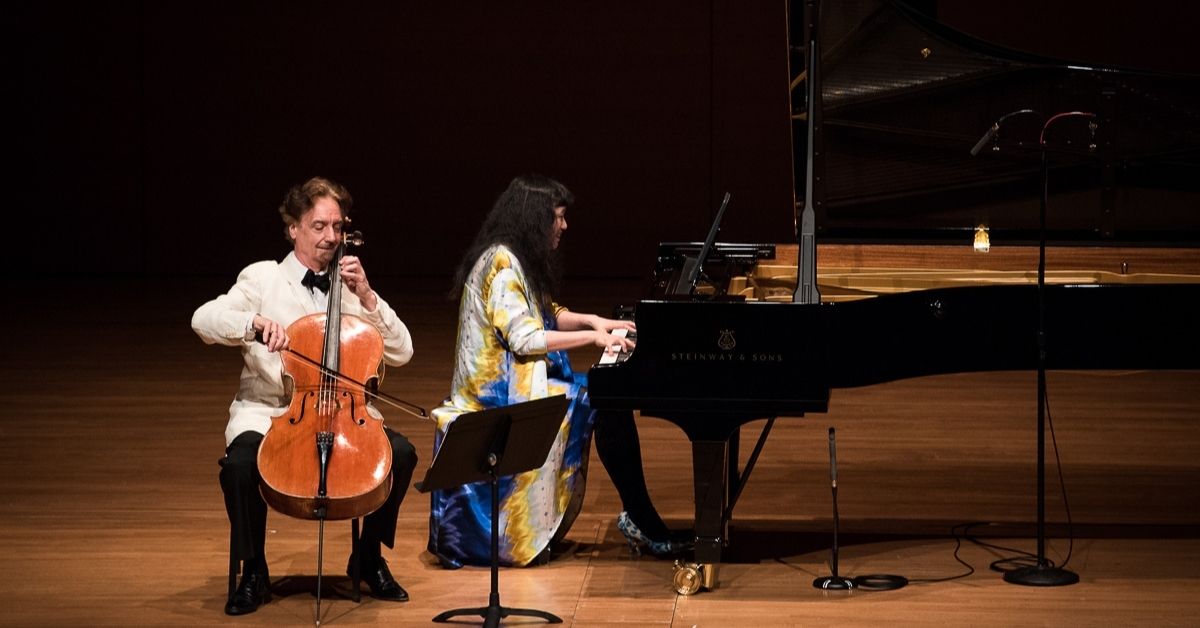 “Our Four Arts 2022 festival, “Around Dvořák”, centers on the music of one of history’s most beloved composers. It’s exciting to discover that the famed creator of the New World Symphony was also the composer of a great number of definitive, masterful chamber works that constitute a significant portion of our standard repertoire today. In looking and listening “around” this impressive Czech composer, we’ll encounter those who influenced, inspired, and impacted Dvořák’s creativity, surrounded by an assemblage of his most heartfelt Romantic works, both classics and novelties. Hear an individual concert or participate in a week-long residency program with a package ticket.” – David Finckel and Wu Han, Beyer Artists-in-Residence

The opening program of this year’s festival frames Dvořák with two composers who would prove to be significant inspirations in his life. The first is the father of Czech music, Bedřich Smetana, whose heart- wrenching Trio served as an outlet for his grief. The second, Henry Burleigh, was a student at New York’s National Conservatory who taught Dvořák the African-American spirituals which informed some of his most famous works. Dvořák’s melodious String Quintet Op. 97, inspired by his time in Spillville, Iowa, rounds out an essential Bohemia-meets-the-New-World experience.

Performers for Around Dvořák festival

Pianist Wu Han, recipient of Musical America’s Musician of the Year Award, the highest honor bestowed by the organization, enjoys a multi-faceted musical life that encompasses performing, recording, and artistic direction at the highest levels. Currently co-artistic director of the Chamber Music Society and Music@Menlo, Silicon Valley’s innovative chamber music festival, she also serves as artistic advisor for Wolf Trap’s Chamber Music in the Barns series and for Palm Beach’s Society of the Four Arts. In addition to countless performances of virtually the entire chamber repertoire, her recent concerto performances include appearances with the Philadelphia Orchestra, the Atlanta Symphony, and the Aspen Festival Orchestra. She is the founder and artistic director of ArtistLed, classical music’s first artist-directed, internet-based recording label (1997). Her more than 80 releases on ArtistLed, CMS Live, and Music@Menlo Live include masterworks of the chamber repertoire with numerous distinguished musicians, the latest being Schubert’s Winterreise with baritone Nikolay Borchev. During the past season, Wu Han designed and produced more than 200 digital media projects, including concerts and innovative educational programs, which have sustained the art of chamber music in dozens of communities across the United States. Wu Han was privileged to serve on multiple occasions as a faculty member of Isaac Stern’s Chamber Music Encounters in Israel, New York, and Japan. A recipient of the prestigious Andrew Wolf Award, she was mentored by an elite selection of some of the greatest pianists of our time, including Lilian Kallir, Rudolf Serkin, and Menahem Pressler.

American violinist Chad Hoopes has remained a consistent and versatile performer with many of the world’s leading orchestras since winning First Prize at the Young Artists Division of the Yehudi Menuhin International Violin Competition. He is a 2017 recipient of Lincoln Center’s Avery Fisher Career Grant, and an alum of CMS’s Bowers Program. Highlights of recent seasons include performances with the Philadelphia Orchestra, Frankfurt Radio Symphony Orchestra, Orchestre de Paris, Konzerthausorchester Berlin, Vancouver Symphony Orchestra, and Orchestre National du Capitole de Toulouse. He has performed with leading orchestras including San Francisco, Pittsburgh, Houston, and the National Symphony, as well as the Minnesota Orchestra, and the National Arts Centre Orchestra. He has additionally performed recitals at the Ravinia Festival, the Tonhalle Zürich, the Louvre, and on Lincoln Center’s Great Performers series. His debut recording with the MDR Leipzig Radio Symphony Orchestra under Kristjan Järvi featured the Mendelssohn and Adams concertos and his recording of Bernstein’s Violin Sonata with pianist Wayne Marshall was released in 2019. He is a frequent guest artist at the Gstaad Menuhin Festival, the Rheingau Festival, and at Festspiele Mecklenburg-Vorpommern, where he was named the winner of the prestigious Audience Award. He appeared as the cover feature on the November 2021 edition of the Strad magazine. Hoopes attended the Cleveland Institute of Music then studied at the Kronberg Academy under Ana Chumachenco. He plays the 1991 Samuel Zygmuntowicz, ex Isaac Stern violin.

Praised by the Strad as an “utterly dazzling” artist, violinist Danbi Um captivates audiences with her virtuosity, individual sound, and interpretive sensitivity. She is a Menuhin International Violin Competition Silver Medalist, winner of the prestigious Salon de Virtuosi Career Grant, and a top prizewinner of the Naumburg International Violin Competition. This season she joins guitarist Jiji for a duo program at the Scottsdale Performing Arts Center and Cooperstown Music Festival, and travels to The Cliburn in Fort Worth for a program with pianist Juho Pohjonen and tenor Karim Sulayman. Other recent and upcoming engagements include solo appearances with the Chamber Orchestra of Philadelphia at the Kimmel Center, a national tour with the Chamber Music Society, and performances at premier national series including Wolf Trap, Saratoga Performing Arts Center, Society of Four Arts in Palm Beach, Parlance Chamber Series, Chamber Music Society of Fort Worth, and Chicago’s Dame Myra Hess Concerts. Notable recent recitals include an appearance on Music@Menlo’s “Carte Blanche” series and her New York recital debut at the Chamber Music Society, where she is a former member of The Bowers Program. Born in Seoul, South Korea, Um moved to the United States to study at the Curtis Institute, where she earned a bachelor’s degree. She also holds an Artist Diploma from Indiana University. Her teachers have included Shmuel Ashkenasi, Joseph Silverstein, Jaime Laredo, and Hagai Shaham. She plays a 1683 “ex-Petschek” Nicolò Amati violin, on loan from a private collection.

Violist Paul Neubauer has been called a “master musician” by the New York Times. He recently made his Chicago Symphony subscription debut with conductor Riccardo Muti and his Mariinsky Orchestra debut with conductor Valery Gergiev. He also gave the US premiere of the newly discovered Impromptu for viola and piano by Shostakovich with pianist Wu Han. In addition, his recording of the Aaron Kernis Viola Concerto with the Royal Northern Sinfonia was released on Signum Records and his recording of the complete viola/piano music by Ernest Bloch with pianist Margo Garrett was released on Delos. Appointed principal violist of the New York Philharmonic at age 21, he has appeared as soloist with over 100 orchestras including the New York, Los Angeles, and Helsinki philharmonics; National, St. Louis, Detroit, Dallas, San Francisco, and Bournemouth symphonies; and Santa Cecilia, English Chamber, and Beethovenhalle orchestras. He has premiered viola concertos by Bartók (revised version of the Viola Concerto), Friedman, Glière, Jacob, Kernis, Lazarof, Müller-Siemens, Ott, Penderecki, Picker, Suter, and Tower and has been featured on CBS’s Sunday Morning, A Prairie Home Companion, and in Strad, Strings, and People magazines. A two-time Grammy nominee, he has recorded on numerous labels including Decca, Deutsche Grammophon, RCA Red Seal, and Sony Classical and is a member of SPA, a trio with soprano Susanna Phillips and pianist Anne-Marie McDermott. Neubauer is the artistic director of the Mostly Music series in New Jersey and is on the faculty of the Juilliard School and Mannes College.

Violinist and violist Barry Shiffman has a rich and varied career as a performer, recording artist, teacher, and administrator. In 1989 he co-founded the St. Lawrence String Quartet. During his 17 years with the quartet he appeared in over 2,000 concerts in venues around the globe, and recorded several critically acclaimed discs under an exclusive contract with EMI Classics. From 2006 to 2010, he served as Director of Music Programs at Banff Centre and from 2010-16 was the Artistic Director of the Centre’s Summer Music Programs and Executive Director of the Banff International String Quartet Competition. During his tenure at The Banff Centre he introduced new programming in classical music performance, composition, popular music, and jazz and oversaw the dramatic growth of the Banff International String Quartet Competition, which he continues to direct. Since 2010 he has been at the Royal Conservatory of Music in Toronto, as both Associate Dean and Director of Chamber Music at the Glenn Gould School and Dean of the Performance Academy for Young Artists. He also serves as Executive Artistic Director of Vancouver’s Music in the Morning Concerts, and Artistic Director of the Rockport Chamber Music Festival. He is the recipient of the Nadia Boulanger Prize for Excellence in the Art of Teaching awarded by the Longy School of Cambridge, Massachusetts. His formal studies were at the Royal Conservatory in Toronto, University of Toronto, Utrecht Conservatory, Hartt School of Music, Juilliard School, and Yale University.

Co-artistic director of CMS since 2004, cellist David Finckel leads a dynamic musical career that has included performances on the world’s most distinguished stages as well as ground-breaking entrepreneurial projects. As cellist of the Emerson String Quartet for 34 seasons, he leaves a legacy of performed and recorded chamber music that includes virtually the complete string quartets of the major composers from Mozart through Shostakovich. His solo and duo discography is equally comprehensive, including all the standard literature for cello and piano. Fascinated since student days by recording technology, he created ArtistLed with pianist Wu Han in 1997, the first internet-based classical label to allow artists complete control over repertoire, sound engineering, editing, packaging, and presentation. His commitment to living luthiers is evidenced through his performances, since 1993, on a cello made for him by the Brooklyn maker Samuel Zygmuntowicz, a copy of the “Duport” Stradivari cello of 1711. At age ten, deeply inspired by the Russian cellist Mstislav Rostropovich, he committed himself to life as a cellist, and at age 16 became Rostropovich’s first American student. After first playing with pianist Wu Han in 1981, he added to his already busy career the responsibilities and opportunities of a professional cello-and-piano duo, both in the recording studio and on the concert stage. Finckel co-directs CMS’s Bowers Program, and as founder and artistic director of Music@Menlo, the festival’s annual Chamber Music Institute. He teaches cello and chamber music at both the Juilliard School and Stony Brook University.

Around Dvořák I with David Finckel and Wu Han